2013.2.19 KIP Forum
"The Rise of Contemporary China and the Transformation of the Asia-Pacific : Current Politics and Future Prospects"
Dr. Roger Buckley

We invited Dr. Roger Buckley, who has been studying on Asia, especially China and Hong-Kong for a long years. This is the second program for "studying Japan and Asia", after the forum in Dec. by Mr. Choi, the Korean ambassador. 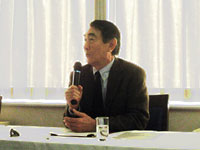 Forum in January: We invited Mr. Itoh who is one of our directors to give a lecture about "Discrimination and Prejudice in America". He taught us about the existence of discrimination in both Japan and America and shared his stories from his experiences in those countries. The forum became a great opportunity to face the reality and think about 'discrimination and prejudice' once again. 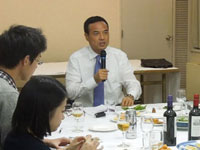 2012.12.14 KIP Forum
"How Mr.Niinami sees the world and Japan"
By Tsuyoshi Niinami, the president and CEO of Lawson, Inc.

Forum in December : We invited Mr. Tsuyoshi Niinami who is the president and CEO of Lawson, Inc.＝On the title of "How Mr.Niinami sees the world and Japan", he gave us a speech. He talked about his own career, the prospects of Japanese economy and what the higher education ought to be. More

2012.11.10 KIP Forum
"Way of a corporation between Japan, China, and Korea"
By Choi Sang-yong, the Korean Ambassador to Japan

Forum in November : We invited Mr. Choi, Sang-yong who was the Korean Ambassador to Japan. On the title of "Way of a corporation between Japan, China, and Korea " he gave us a presentation from the view of political philosophy that is his major. More 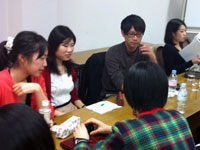 2012.10.27 KIP Forum
"Measuring the National Power"
By Toshiro Nishizawa, a head of foreign investigation of JBIC

Forum in October: We invited Mr.Nishizawa who currently works as a head of foreign investigation of Japan Bank for International Cooperation (JBIC). The main theme of his lecture was "Measuring the National Power" We also discussed about the future Japanese national power. Not only the main theme but also he told us about his career experiences and we could learn a lot from his lessons. More 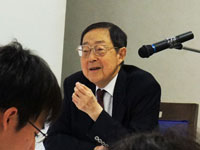 2012.9.22 KIP Forum
"Experiences before, during, and after the World War II"
By Shijuro Ogata, former board member of Bank of Japan

Forum in September: We invited Mr. Ogata, who is familiar with the situation before and after the World War II. He told us about his experiences and what had been going on in Japan around that period. Also, he pointed out some problems we are faced with today, such as "misapplied equality".

2012.6.12 KIP Forum
"How consultants and their brains work"
By Satoshi Konagai from Boston Consulting Group

Forum in June: We invited Mr. Konagai, who works for Boston Consulting Group and is now on loan to National Policy Unit. He explained how consultants think strategies, what is their role in organizations (for example companies and governments), and what he is thinking about his future career.

These few years we hold discussion with American science students from Nano Japan Program. This year we talked about journalism, welfare, and education.

Forum in April: After an annual KIP meeting, we invited two bureaucrats from Ministry of Finance. They explained why they are trying to raise the consumption tax, which is one of the recent hot topics in Japan.