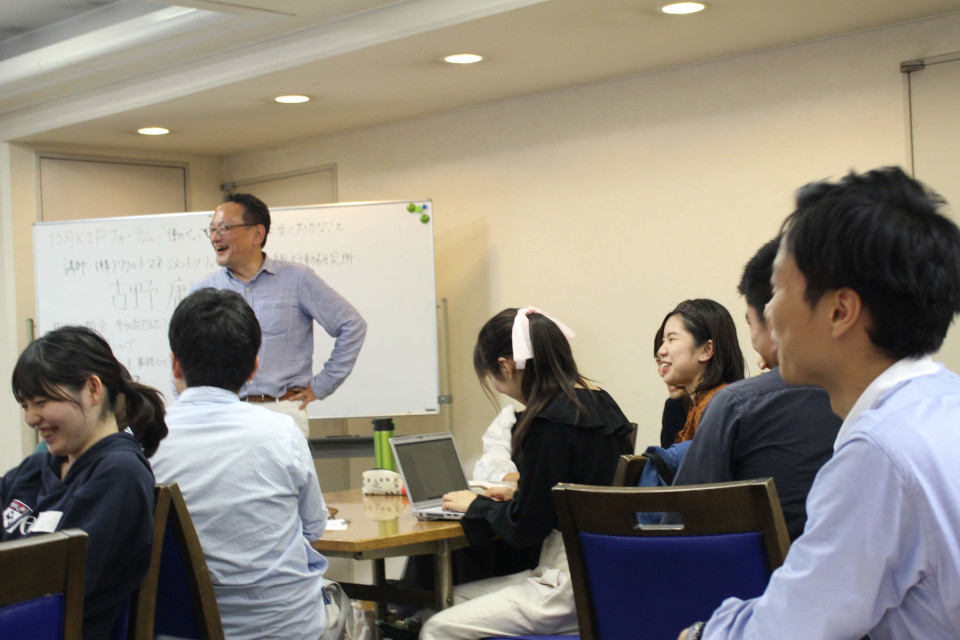 Mr. Yoichi Furuno : He joined Recruit Co., Ltd. In 1987 after graduation from the Faculty of Engineering, the University of Tokyo. He obtained an MBA at University of Southern California Marshall School of Business. Yoichi Furuno assumed his present post as Chief Director, Institute for Organizational Behavior Research, Recruit Management Solutions Co., Ltd. in 2009.

At the beginning, we had a discussion on the ideal way of working based on the allegory of "Mexican fishermen and businessmen".

When we were asked whether we agreed with the fisherman or businessmen, the answer was divided almost evenly.

As a reason to support the fishermen, there were opinions that the current happiness of the person should be prioritized, and the time with family and friends would be reduced when starting a business. On the other hand, from the businessmen’s point of view, some students pointed out that it is possible to prepare for economic risks by starting a new business and increasing income, and one can broaden one’s horizon by gaining various experiences in the process of expanding business.

In response to the question of how we should work in the era of diversified working styles, Mr. Furuno said “To survive, and then be Happy”. “Happy” means being satisfied with positive emotions such as satisfaction in looking back, enrichment to the present, hope for the future. In contrast, “survival” means adapting to the external environment. To survive in the cooperate world, you need to endure your current pleasures and prepare for future risks. Since we can’t ignore either of them, it is important to integrate the two stances that often conflict to work successfully.

In the second half, we learnt the relationship between "working" and "happiness" based on various data and philosopher's comments. Among them, the idea that approval from others is important to work happily was introduced, which brought us into a discussion on the impact of reduced interaction at a workplace due to the spread of teleworking to our happiness.

We also discussed about various other topics related to “working” in modern society, such as how to cope with the prolongation of life after retirement and automation due to technological development.
Lastly, we would like to thank Mr. Yoichi Furuno, who gave us great opportunity to enrich our understanding of Working with highly suggestive stories.