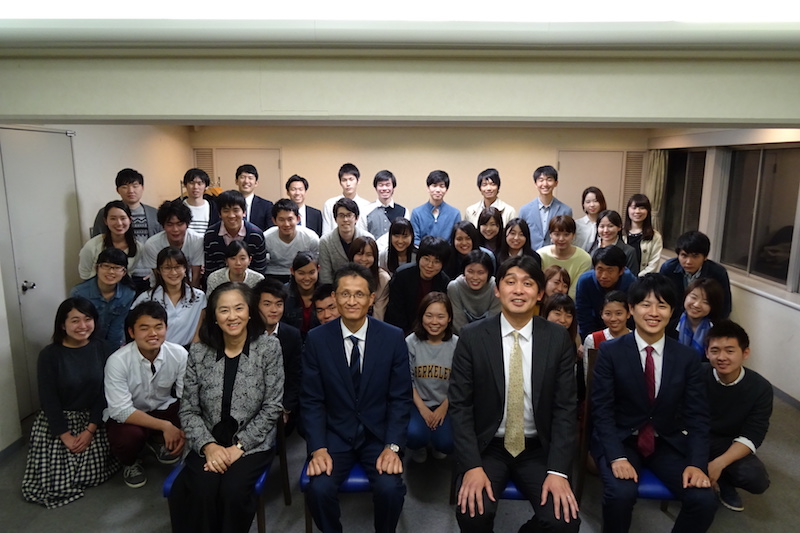 Next, Mr.Kumekawa talked about the perspective of "strengthening the competitiveness of the Tokaido Shinkansen." The Tokaido Shinkansen put much emphasis on six points, including safety, accuracy, comfort, high speed, high frequency, and environmental compatibility. For example, from the viewpoint of safety, they have the prevention system for earthquake disaster to judge whether to stop the Shinkansen, in 2 seconds after sensing the P wave. Also, by pulling the rail inside each of two rails, JR Central is building a mechanism that the vehicle does not derail even if the wheel is detached from the rail.

Lastly, from the aspect of "challenge of linear Shinkansen," Mr. Kumekawa said that what linear Shinkansen will bring about is roughly divided into three areas: duplication of the artery, integration of the three metropolitan areas by shortening traveling time, and expansion of utility of the Tokaido Shinkansen. In addition, as a meaning for challenging one of the innovative technologies that shinkansen can reach 500 km per hour with 10 cm away from the ground, Mr. Kumekawa mentioned this technology is related with unique background of Japan, earthquake. It is extremely safe even when earthquake has occurred because it will ensure safety. Also, Mr. kumekawa said that while Central Shinkansen was created JR Central covering all the expenses of construction.

Based on his speech, we had a group discussion about "the advantage and disadvantage of Linear Central Shinkansen." If business trip between Tokyo and Osaka takes only one hour, there are many advantages. For example, business men can save some time and they don’t have to live alone away from their family. Moreover, most people will be able to travel easily and mobility of people will increase. The disadvantage is that it can have negative influence on the environment such as mining of tunnel, and the number of people staying at accommodation facilities in tourist spots may decrease because it takes less time to trip. Also, the inequality can expand due to the population concentration around urban areas.

Mr. Kumekawa said that forming urban areas with scale of 60 million people by opening linear is unique in the world, and this lecture is valuable opportunities considering how Japan will change in the future. Thank you so much for taking some time for us having the wonderful and meaningful forum.