Apr.28.2017 KIP Forum “President Trump and how would Japan deal with him”
Mr.Ichiro Fujisaki, The former ambassador extraordinary and plenipotentiary to the US 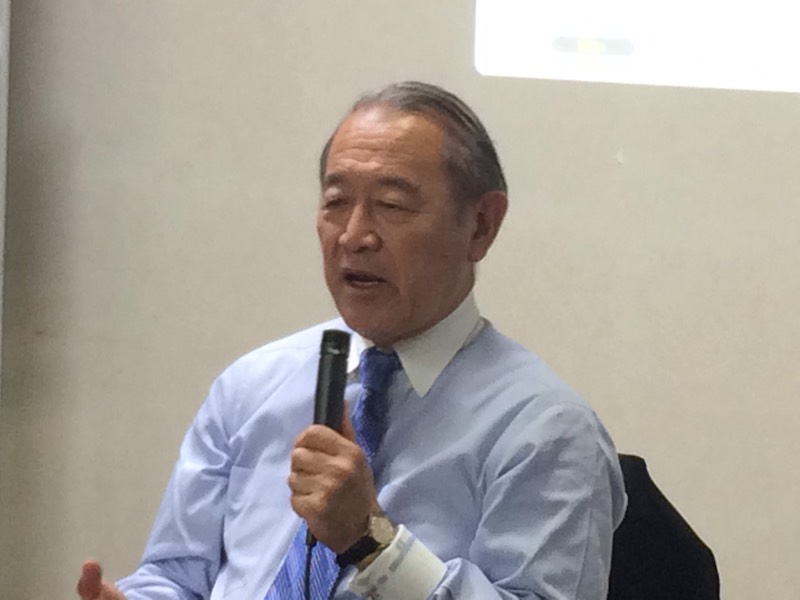 Mr. Ichiro Fujisaki： Mr. Ichiro Fujisaki served as an ambassador to United States in 2010 and is currently the president of the Japan-America Society and a professor concerned with international strategy in Sophia University.

In the first half, Mr. Fujisaki gave us the presentation on the United States presidential election in 2016 and Donald Trump's Policies so far, and then he talked about how Japanese government would deal with him. When Trump won the election, most Japanese media reported his victory as if it was inevitable and the turning point of the US history. However, at the beginning of his presentation, Mr.Fujisaki pointed out that it was a very close election. He also mentioned that Trump won Pennsylvania, Michigan and Wisconsin by a very narrow margin and Hillary Clinton’s email scandal caused just before the voting day. Therefore, it is difficult to reason that most people in the United States welcomed Trump, so he won the election. And then, Mr. Fujisaki emphasized the importance of analyzing information and thinking about it by oneself. This speech was the most impressive part for me in his presentation. After that, we started Q&A session. One student asked how he thought about the Philippines’ diplomacy. Other student questioned about his experiences as an ambassador in United States. He answered them very clearly and honestly.

In the latter half, we had a group discussion on “Is it justifiable for US to intervene in North Korea proactively?”. In my group, we partly agreed with the US’s intervention in North Korea in recent. However, we thought US should apply less economic sanctions against North Korea. That’s because more economic sanctions would impoverish people in the country and that would make Korean reunification more difficult. After each group’s presentation, Mr. Fujisaki made a general comment. He pointed out that if we stop or reduce the restriction on North Korea and its economy recovered, we will have to be more worried that it invests more money to the military weapons. He also suggested that China is the key country to solve this problem. He said that Japan and United States had to persuade China to restrict North Korea trade. Finally, I would like to express our gratitude to Mr. Fujisaki for taking time to speak to us.