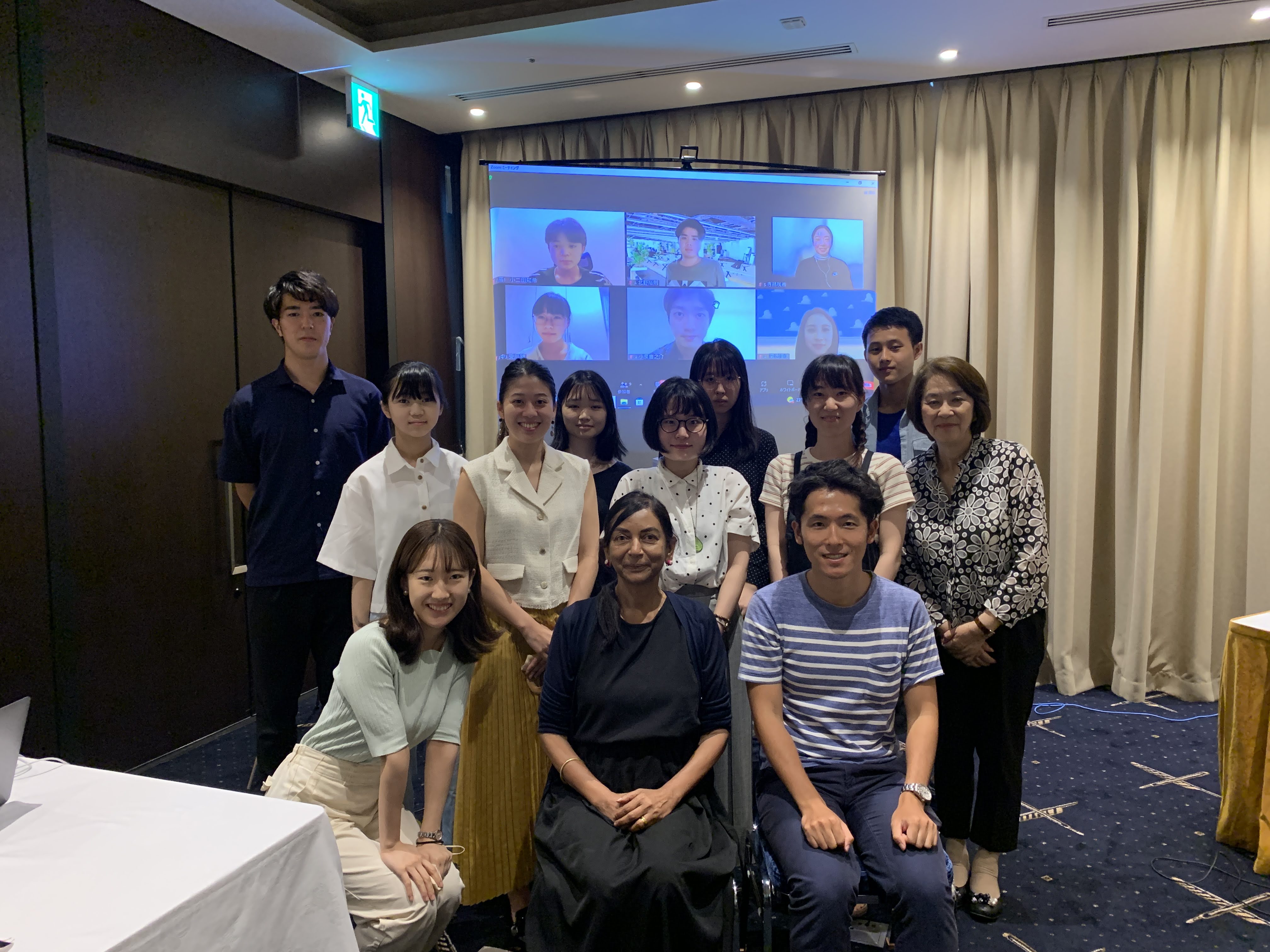 Profile: jounalist
Ms. Suvendrini Kakuchi is a Sri Lankan who specializes in Japan-Asia relations and works as a journalist in Japan, Sri Lanka, India and other Asian countries. She graduated from the University of Colombo, Sri Lanka, Sophia University and is a Neiman Fellow of Harvard University. She is currently working as a Tokyo correspondent for the University World News in the UK. She will serve as President of the Foreign Correspondents' Association until June 2022, she has a Japanese husband and speaks English, Japanese, Sinhala and Tamil.

The forum held on July 9 was an important opportunity for all participants to seriously think about the future of Japan as if it were their own, in the context of the upcoming Upper House election and the shooting of the former prime minister that shook the whole country the day before.
The first half of Ms. Kakuchi's lecture focused on Japan's relationship with Asia.
The overwhelming rise of China, the war in Russia and Ukraine, and other world developments are affecting every corner of our lives. In this context, Ms. Kakuchi spoke about Japan's presence, role, and expectations in Asia in particular.
After the forum took place, local media reported that President Rajapaksa had decided to resign on July 13 in Sri Lanka, which is in the midst of an economic crisis. In Colombo, the largest city, tens of thousands of people packed and occupied the official residence of the president demanding his resignation, and Prime Minister Wickramasinghe's house was torched, prompting him to announce his resignation.
In this rapidly changing environment, Ms. Kakuchi discusses Japan from an Asian perspective. Japan's major influence on Asia includes investment, technology, products, culture, the history of colonization in Asia, and the acceptance of immigrants, migrant workers, and foreign students. It is being done in a strategic manner. In addition, Asia is looking to Japan for small and medium-sized enterprises and cheap, advanced technology that is relevant to their daily lives."
I was very impressed by what she said about the importance of Japan forming equal partnerships with ASEAN and South Asian countries by providing soft power, governance, support that gets into the lives of local people, and technology for small and medium-sized enterprises, as Japan's position in Asia has now declined, especially compared to China.
The subject of the second half of her lecture was Sri Lanka, where Prime Minister Wickramasinghe declared the country "bankrupt" on July 5.
She began with the background story of China's growing influence on Sri Lanka after the long civil war.
Sri Lanka needed funds for postwar reconstruction in order to completely end the civil war and break through economic stagnation, and economic aid from abroad was essential. China has been increasingly influential in Sri Lanka and is now the leading provider of infrastructure loans. The terms of Chinese loans are stricter than those of other countries and institutions, with interest rates of 2% for some, 6.5% for others, and short deferment periods. The company borrowed $1.4 billion from China to develop port infrastructure, but in 2017, it stalled on repayment and was forced to hand over the right to operate the port of Hambantota, the largest port in South Asia, to a Chinese company for 99 years, which had pledged the port as collateral.
During the Q&A session, questions comparing Japan with China and Sri Lanka were asked. In order for Japan to have a stronger influence on Sri Lanka, Ms. Kakuchi said, it is necessary to seek and clarify Japan's unique ways, not in a confrontational way with China. The session also included a comparison of Sri Lanka, where women are making progress, and Japan, where women have yet to make inroads in the top echelons of business and politics, and a discussion of Japan's future and the challenges it faces.

A discussion was held on the topic, "Should Japan be or can Japan be a leader in Asia?
The opinion was expressed that to be a leader in Asia, Japan needs to be stable in business, industry, and politics in Asia. However, opinions were divided on what kind of leader should be a leader: "A leader's role is to have economic power and to assist other countries," or "A leader's role is to form business partnerships and to accompany others. Many expressed the opinion that they would enhance long-term assistance while building equal partnerships with Southeast and South Asia. The issue of how to consider the sense of competition, crisis, and relationship with China and South Korea was also raised. Some took the position that in order to compete economically in the future, it is important to take the lead and establish a presence in healthcare, governance, and other systemic aspects that support corporate management.
In the group discussion, the majority of the participants agreed that Japan should become a leader in Asia in the future. Some of the opinions were that the image of the leader that Japan aspires to be is not one of a top-down relationship, but one that leads international cooperation in the conflict of interest of each country while accompanying it economically. Reasons why Japan should be a leader and provide assistance in Asia include: "Because Japan's continued assistance may return benefits," "To improve Japan's external standing and credibility," and "Because Japan should lead in such foundational areas as democratic principles, healthcare, and governance. A lively discussion ensued from a variety of perspectives.

The forum highlighted the limited knowledge of Asia among the students and raised the issue of whether the situation in Sri Lanka is regarded as something that is not directly related to their own lives. In addition, the forum made us keenly aware of the need to find Japan's unique stance on how to improve Japan's economic status and increase its presence in Southeast and South Asia, as well as what constitutes an equitable partnership, in the ever-changing Asian and global situation.