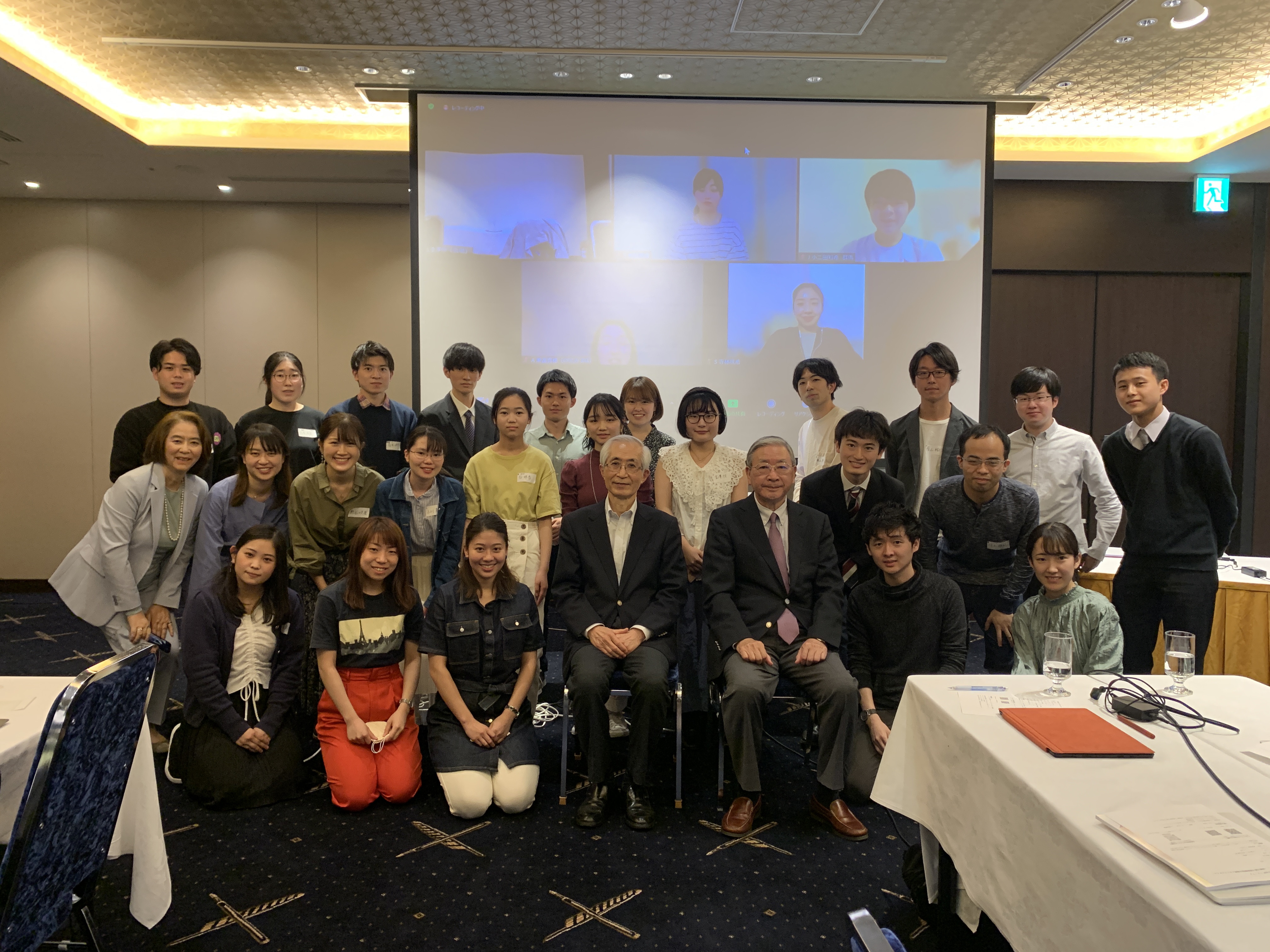 Profile: He served as President of the Institute for Global Environmental Strategies (IGES) from 2007 to 2017, and is currently Special Research Advisor to IGES and President of Ikurei Japan, Inc. since 2005.
He graduated from the Department of Urban Engineering, Faculty of Engineering, the University of Tokyo in 1967, and joined the then Ministry of Health and Welfare in 1969, where he was a founding member of the then Environment Agency in 1971, working on environmental policies in the areas of air and water quality conservation and environmental impact assessment. He was also involved in intergovernmental negotiations, including the Kyoto Protocol, and was appointed as a Deputy Director-General for Global Environment in 2001, retiring from the Ministry of the Environment in 2004.

Mr. Hamanaka explained climate change and the sustainable environment, resources, and energy. In 2021, the IPCC AR6 declared that there was no doubt that human activities contributed to global warming. In other words, human prosperity has negative impacts on ecosystems and natural resources. Agriculture which has played a key role in human development has been undermined. Interestingly, representatives in developed and developing countries have different perspectives on environmental problems. At the 1972 United Nations Conference on the Human Environment, or Stockholm Conference, developed countries argued that environmental pollution was getting worse, and that international cooperation was the only way to solve it. On the other hand, developing countries insisted on the necessity of international cooperation to escape poverty for further development. Therefore, instead of choosing between the environment and development, "sustainable development" was introduced in 1987. Considering past environmental pollution in Japan such as Minamata disease, there were polluters and victims. In these cases, polluters take responsibility for the pollution they cause. This structure is simple so that it was easy to build public consensus on environmental pollution. Compared with the past, environmental issues are becoming more complex today. Mr. Hamanaka mentioned we also need to focus on the upstream, or the stage of production, rather than the downstream, or the stage of pollution. Social reform is essential to deal with environmental problems that have become more complicated. He told us that it is necessary for the top managers of companies to change manufacturing processes and meet environmental obligations, for the government to promote the integration of various related fields instead of only focusing on the environment or the development, and for consumers and citizens to actively participate in solving these problems.
Although the programs for reducing Greenhouse Gas(GHG) emissions are currently underway, global GHG emissions are still increasing. Therefore, unfortunately, we are not yet in a position to limit the global average temperature increase to 1.5°C. Considering the declaration of zero emissions at COP26, developed countries must be actively involved in reducing GHG emissions to achieve the goal. To shift toward decarbonized society and economy, Mr. Hamanaka emphasized the importance of consumer choice and behavior as well as the efforts of local governments and companies. During the Q&A session, we discussed the reliability of CO2 emission values of each country and policies aiming at national growth those could lead to environmental destruction, for example.

The theme of the discussion was "How to promote 1.5-Degree Lifestyles toward sustainable living." We discussed the current lifestyle carbon footprint (CFP) and how to reduce the carbon footprint of household consumption. We focused mainly on food, housing, and transportation, and considered what we could do and should do. In my group, we focused on housing, especially on consumer energy choices. To promote the use of renewable energy sources which have a low carbon footprint, we thought it was important to raise public awareness of environmental issues. We discussed education and financial incentives by creating new eco-point systems would be helpful. The focal point of our discussion was government initiatives and consumer energy choices. Mr. Hamanaka also provided new perspectives on consumer behavior, such as purchasing well-insulated houses to reduce energy use. Other groups focused on food and explained what we could do to reduce CFP. They made several suggestions such as visualizing the carbon footprint of food, reducing food loss and making vegan food more accessible. Mr. Hamanaka made incisive comments, including how to change consumer behavior by displaying CFP, and hoped that this would be an opportunity for further discussions.

In this forum, we chose the theme of carbon footprints from large-scale environmental problems, and had in-depth discussions, considering what we can do in our daily lives. I felt this forum was a precious opportunity to take a closer look at environmental issues.