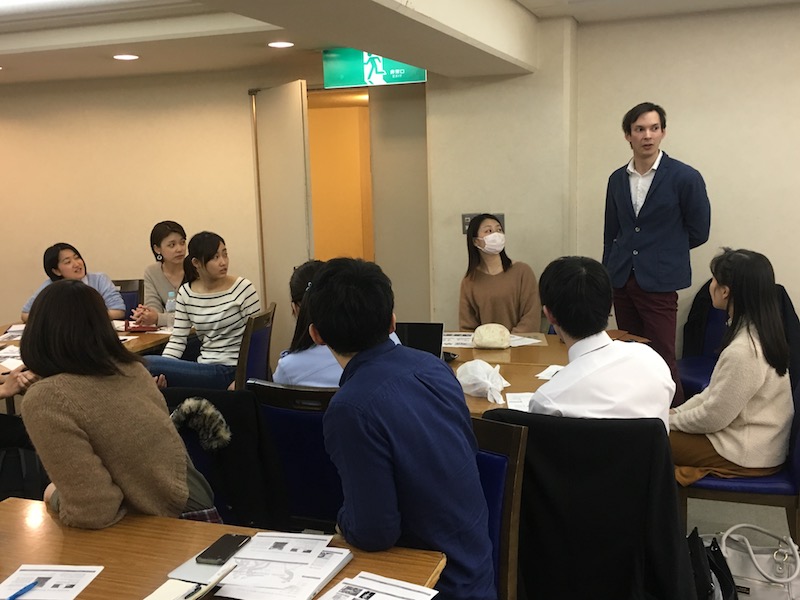 Mr. Pohl Michel: A French member of KIP. Currently studying Bioengineering in the Graduate School of Engineering, the University of Tokyo.

This event consisted of two parts; the former being the lecture by Mr. Michel and a Q&A session, and the latter, a group discussion time on the topic “Which do you think is better to promote gender equality; rules or individual actions?”

Mr. Michel firstly explained about gender in France from the legal aspect, and then talked about current situation of gender inequality from the aspect of politics, occupation, and advertisement. First, he introduced the preamble of the French Constitution in 1946, which stated that “the law shall guarantee to women equal rights with men, in all domains” and proved clearly that gender equality had been guaranteed by the law. Next, he introduced some gladsome situation on political field. President Oland made realization of gender equality within the regime, and the percentage of women in parliament exceeded 40% in 2017, whereas it was only a few percent in the 1960s. However, it seems that gender equality is still far away from realization in terms of occupations. Even though more women hold a higher education degree than men, they tend to engage in jobs with low salaries such as babysitters and salespeople. In addition, as for working hours, more women take in part-time jobs and more men take in overtime work, and this results in the gradual widening of wage gap. Mr. Michel thinks that there are some possible explanations about this consequence. First, women tend to major in academic subjects such as literature and history, which is sometimes difficult to directly utilize for jobs. Second, there are some stereotypes saying that certain jobs should be done by women and other by men. Third, women sometimes do not have enough confidence in themselves. Fourth, the share of domestic housework is not equal. After having pointed out these four reasons, he talked about gender inequality from the aspect of advertisement. He explained that men play about 80% of professional roles such as bankers, on the other hand, women are often drawn as consumers and object of desires. He insisted that these promotion of stereotypes through advertisement might have promoted the distinguish of job types between men and women. In the end, some positive actions in France were introduced. Women’s political participation is promoted with the word “parite” and "equality label" is given to companies that are striving to realize gender equality.

In the second half, we held a discussion with the theme of “which do you think is better to promote gender equality; rules or individual actions?” Those who considered that individual actions were better insisted that while the law was a one-way means to declare one’s intention, individual actions had much more potential to encourage surrounding people. Moreover, some said that acting as a role model in family had bigger impact on next generation. On the other hand, those who considered that rules were better insisted that the range that individual actions could influence was limited. Moreover, some said that we could not improve certain situation without the revision of rules such as the difficulty in getting child-care leave. During the discussion, we talked about to what extent the difference between women and men should be respected and to what extent the treatment should be unified. Various opinions vigorously came about this, and we finally came to conclusion that we should not judge a person because he/she was "female" or “male," and we should respect each individual’s opinion. The reason why we thought in this way was because it depended on each individual to what extent we wanted to be treated in the same way and to what extent differently.

Today’s lecture and discussion were very good opportunities to rethink about what gender equality meant and how we could realize it. We would like to express our special thanks to Mr. Michel for his fascinating lecture. Thank you very much.